Skip to content
Home/News/Trade/BREXIT: the position of the European sugar sector

BREXIT: the position of the European sugar sector

We remain convinced that the best option to avoid disruption of EU-UK trade and of the EU sugar market itself would be for the UK to remain in the Single Market and customs union.

Given that these options seem less likely under the current UK government, we would like to highlight a number of concerns.

CEFS and CIBE welcome the proposal of the European Commission for a status quo transition period to cover the period between the official departure of the UK from the EU in March 2019 and the entry into force of a new EU-UK trading arrangement.

We call for flexibility concerning the duration of this transition period in the light of past experience. No EU trade agreement has been concluded and provisionally applied in 21 months. Should no agreement be in place by 31 December 2020, the transition period should be extended in order to avoid a ‘trade gap’ and consequent disruption of sugar trade flows between the EU and the UK.

After Brexit, the UK will be a major third country export market for beet sugar from the EU-27. The UK is a deficit sugar market and depends on EU exports to meet domestic consumption. It is therefore essential that sugar producers in the EU-27 retain current access to the UK market with minimal disruption during the period of negotiation and implementation of the new trading arrangement.

The trade policy that the UK government looks likely to pursue raises risks. A reduction of duties applied to imports of raw sugar for refining would result in increased quantities of refined cane sugar on the UK market. This could prompt an increase in exports of UK beet sugar to the EU: in other words, triangular trade. We call on the European Commission to take steps to prevent this.

The current status of the UK as an EU Member State must not prejudice the discussions on rules of origin. In line with the EU’s other bilateral trade agreements, the refining of imported, third country cane sugar must not confer origin under the new trading arrangement. Non-originating sugar used in the manufacture of processed products to be traded under preference must be subject to an upper threshold by weight. Cumulation of origin must be prohibited.

The EU’s concessions on sugar were negotiated as a bloc of 28 Member States. These concessions must be fairly divided between the UK and the EU-27 to reflect the respective import shares of each partner. This goes for the EU’s WTO (‘CXL’) tariff-rate quotas and for the bilateral quotas, most notably with Central America and South Africa.

The EU beet sugar sector cannot afford the increase in real market access for third countries that would result from maintaining the EU-28 quotas at their current level for a diminished EU. Leaving the Central America and South Africa TRQs undivided would result in an increase in real third country market access to the EU-27 of 120,000 tonnes, based on historical quota utilisation rates.

[1] CEFS’ UK membership did not participate in the formulation of this statement and as such should not be assumed to have agreed or disagreed with its content.

[2] In customs terms, this means that the manufacture of products falling under HS heading 1701 must be subject to at least a change in tariff heading in order to benefit from bilateral preferences.

You can download the .pdf version of our position here.

Many thanks to you @MariePierreV and your team for putting together this important and timely report. @SugarEurope endorses and fully supports better enforcement of international trade rules and #FTAs 🔍🇪🇬 Egypt's sugar import ban 🔍🇮🇳 India's sugar export subsidies 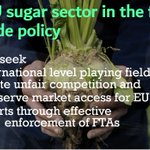 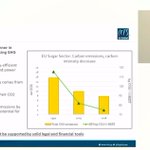